This event has passed.

The Ambassador exchanged views with current and prospective AmCham members regarding the evolving political process in Libya and prospects for improving the business climate for U.S. investment.

Ambassador Norland underscored that the ongoing political process in Libya provided a unique opportunity for Libyan political and economic leaders to achieve these reforms and make Libya a strong and reliable partner for private sector investment.

American companies expressed a strong desire to deploy their technical expertise and financial resources to help rebuild Libya’s infrastructure and economy.  The business leaders emphasized that greater investment in Libya required long-term political stability, transparent economic decision-making, an agreement on long-term revenue management, and a more enabling business environment, including the Central Bank’s timely and consistent approval of letters of credit that Libyan importers require to honor payments to their foreign business partners.

AmCham Libya joins the United States Embassy in supporting American businesses’ commitment to investing in a more prosperous future for Libya and its people. 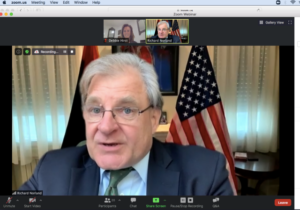 Ambassador Norland was confirmed by the U.S. Senate to serve as U.S. Ambassador to Libya on August 1, 2019. A career diplomat, Ambassador Norland most recently served as the Foreign Policy Advisor to the Chairman of the Joint Chiefs of Staff, General Joseph Dunford. Previously he served as U.S. Ambassador to Georgia, U.S. Ambassador to Uzbekistan, Deputy Chief of Mission in Afghanistan and Deputy Chief of Mission in Latvia. He has served as the International Affairs Advisor/Deputy Commandant at the National War College, as a Director for European Affairs at the National Security Council, and as a Senior Fellow at Georgetown University’s Institute for the Study of Diplomacy.